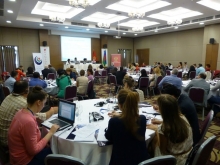 On behalf of the Montenegrin Government, a conference entitled Economic Empowerment of Roma was held in Podgorica, Montenegro by he current Presidency country of the Decade of Roma Inclusion 2005-2015 Initiative from June 17 to 18, 2014.

Marjeta Gašperšič, the director of RIC Novo mesto that runs the Grundtvig Multilateral project FINALLY, presented the project Financial Literacy for the Roma and participated in fruitful discussions. The presentations are uploaded on the website of the Decade of Roma Inclusion at the following link: http://romadecade.org/egy-cikk.php?hir_id=9761

The Decade of Roma Inclusion 2005–2015 is an unprecedented political commitment by European governments to eliminate discrimination against the Roma and close the unacceptable gaps between the Roma and the rest of the society. It is an international initiative that brings together governments, intergovernmental and nongovernmental organizations, as well as Roma civil society. The Decade is governed through a rotating annual presidency, currently being held by Montenegro.

A French revue was sentenced to a 2,000 euros fine on appeal after publishing a stigmatizing and racist issue on Roma communities 17.12.2015

The Council of Mayors of Greater Bordeaux is currently debating on how to handle Roma communities in their territory 17.12.2015

Publication of the e-RR project and the international conference Broaden Horizons 26.02.2016

A court decision ordered the continuation of the Roma village construction in a suburban area of Greater Lyon 17.12.2015