A French revue was sentenced to a 2,000 euros fine on appeal after publishing a stigmatizing and racist issue on Roma communities 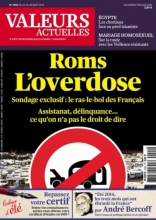 Released in 2013, the related issue was entitled ‘Overdose of Roma people-A survey reveals that French people are fed up with Roma people-Financially supported, offenders…what we are not allowed to say on Roma people’. The heading of the main article in the issue was ‘France is being invaded by gypsies mainly coming from Romania and Bulgaria’.

Numerous politicians and other French citizens on social networks strongly reacted after the release of this most racist issue with the purpose incitement of racial hatred towards Roma communities. It is therefore not surprising if the revue was condemned by the Paris Criminal Court.

Besides the 2,000 euros fine, the revue was also asked to give a symbolic euro to local organizations working with Roma communities and fighting against discrimination: La voix des Roms and La Maison des Potes.

A French revue was sentenced to a 2,000 euros fine on appeal after publishing a stigmatizing and racist issue on Roma communities 17.12.2015

The Council of Mayors of Greater Bordeaux is currently debating on how to handle Roma communities in their territory 17.12.2015

Publication of the e-RR project and the international conference Broaden Horizons 26.02.2016

A court decision ordered the continuation of the Roma village construction in a suburban area of Greater Lyon 17.12.2015